Solid State Drives (SSDs) are becoming increasingly popular due to their faster data access and lower power consumption when compared to traditional hard disk drives (HDDs). There are two main types of SSDs available on the market today: those that use the older SATA interface and those that use the newer NVMe interface. So, what’s the difference between these two types of SSDs? and which type of SSD is right for you? Let’s look at NVMe vs SATA SSD compare and analyze what data storage you need to buy with Memoright now. 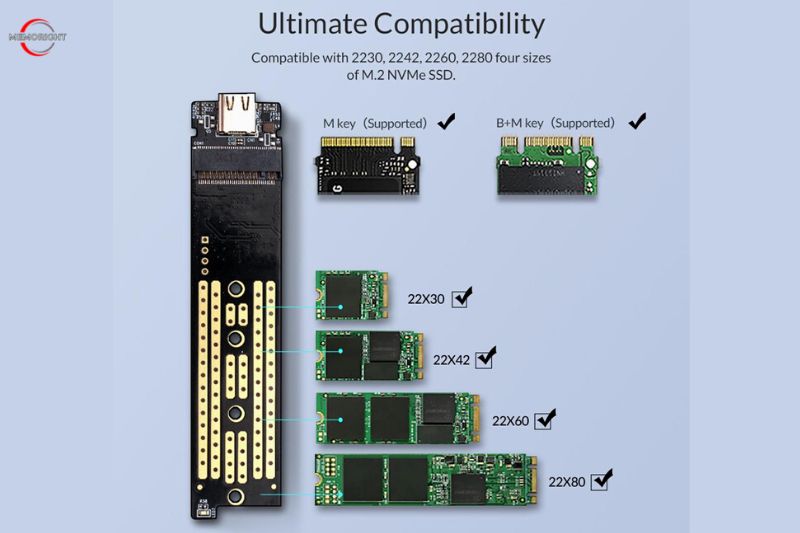 Non-Volatile Memory Express (NVMe) technology was introduced in 2011 to address the various bottlenecks of the SATA interface and communication protocols. NVMe technology utilizes the PCIe bus, instead of the SATA bus, to unlock enormous bandwidth potential for the storage device. PCIe 4.0 (the current version) offers up to 32 lanes and can, in theory, transfer data up to 64,000MB/s compared to the 600MB/s specification limit of SATA III.

The NVMe specification also allows for 65535 command queues, which can have up to 65536 commands per queue. Recall that SATA-based SSDs are limited to a single queue with a depth of only 32 commands per queue. NVMe technology creates massive potential for storage devices via increased efficiency, performance, and interoperability on a broad range of systems. It is commonly believed that technology will become the new industry standard. 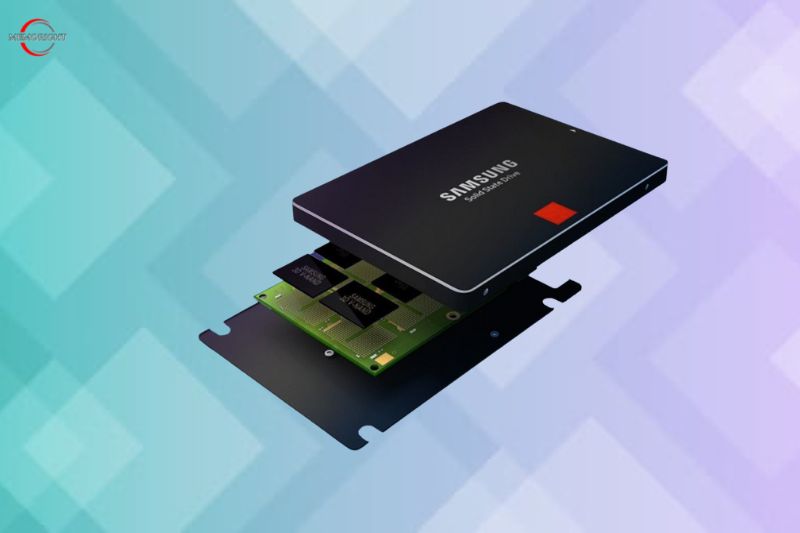 Serial ATA (SATA) technology was introduced back in 2000 as an improvement to the existing Parallel ATA technology, which was hampered by cable size, cost, performance, and functionality. Both technologies were sufficient for HDDs, which were substantially less capable than today’s SSDs. Read information about the difference between SSD and HDD here.

The advent of SATA-based SSDs demonstrated that the ATA bus had reached its performance limit. Where HDDs were only able to achieve 50-120 MB/s in write performance, SSDs could saturate the SATA bus at 550 MB/s. In spite of the bus limitation, it’s common to see an overall system performance improvement of 10-15 times when using SATA-based SSDs in place of legacy HDD technology. 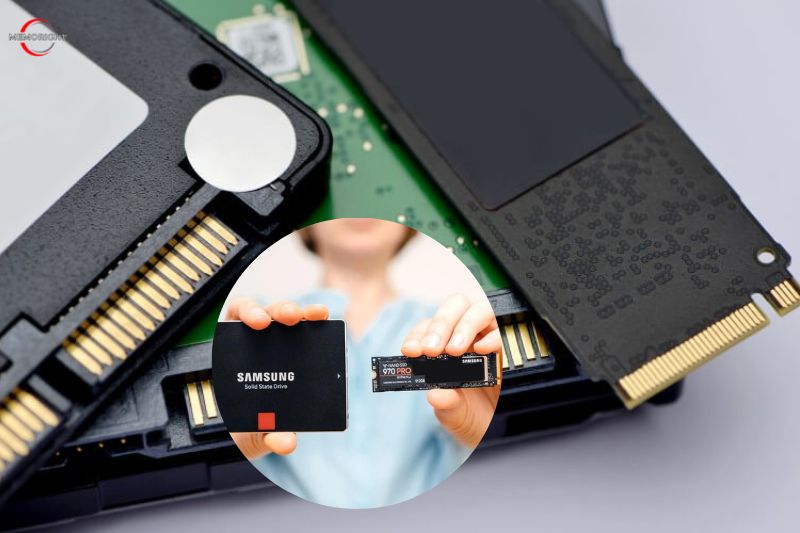 The first iteration of SSDs launched with the SATA interface. This included a small L-shaped connector to transfer data and a similar larger connector for power delivery. Modern SSDs, on the other hand, have switched to the PCIe interface, which features a straight connector that makes it possible to insert the motherboard without using wires easily. While the first PCIe SSDs were introduced as add-on cards, resembling little graphics cards, the introduction of the M.2 form factor drastically altered the landscape.

SATA and PCIe SSDs use M.2 today, and most motherboards have one or two specialized M.2 slots. Additionally, M.2 drives are much smaller than 2.5-inch SATA and have a flat profile that merely rests on the motherboard, resembling a strip of gum. NVMe is typically found on SSDs with the M.2 form factor in current PCs, especially laptops because it is highly efficient with PCIe.

The maximum SATA SSD read speed is 600 MB/s; however, in an ideal environment, that speed is the overhead limit. Typical SATA III speeds today are slightly or much lower than 600.

Top read speeds for NVMe SSDs range from 3,500 to 5,000 MB/s. The 970 Evo Plus from Samsung, one of the leaders in SSD manufacturing, has a maximum sequential read and write speed of about 3,500 MB/s and 3,300 MB/s, respectively. Although the Samsung 970 Pro is still a good option, the Evo Plus has pushed it out in terms of performance.

Additionally, under perfect circumstances, some NVMe drives, such as the Samsung 980 PRO, can reach speeds of about 7,000 MB/s. Buyers shouldn’t rely on this rate for routine transactions, though. Top rates are measured in a variety of precise test conditions.

M.2 is a well-known name in the SSD industry in addition to SATA and NVMe. So What is an M.2 SSD? An M.2 SSD is just an SSD with the M.2 form factor. Previously, it was known as the Next Generation Form Factor (NGFF).

The SATA International Organization and a group of business leaders created M.2. It is frequently mentioned as a small Serial Advanced Technology Attachment (mSATA) SSD alternative. Even though mSATA is an obsolete interface, SSDs using the interface are still readily available.

Finally, several M.2 SSD varieties exist, such as SATA, PCIe NVMe SSDs, and PCIe AHCI SSDs. Therefore, keep in mind that M.2 hints about the form factor and doesn’t tell you much about the used interface, which is equally significant, if not more so.

NVMe-based SSDs were launched at a higher price than SATA drives, even though they are smaller and faster. Today, however, things are different because the cost is practically the same, and in certain circumstances, NVMe drives are slightly less expensive. For instance, the 250GB version of Samsung’s 980 M.2 NVMe SSD costs $50, while the 870 EVO 2.5-inch SATA SSD and even the 860 EVO M.2 SATA both cost roughly $90.

In conclusion, NVMe is the fastest storage technology to come. It is strongly advised that you use an NVMe SSD if you want to upgrade your storage, as only the biggest capacities of SATA are truly worthwhile on a cost-per-gigabyte basis.

Which One You Should Buy? 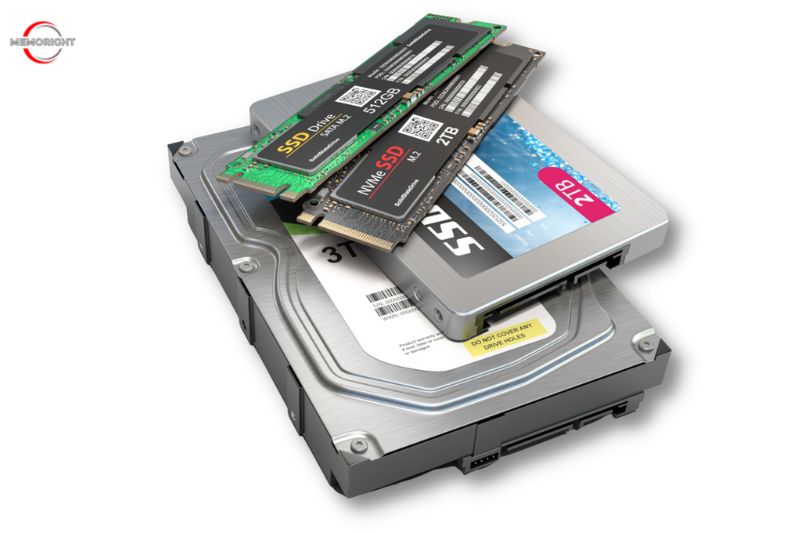 Compatibility with your computer is the most important factor in choosing an SSD interface. It can be challenging to tell the difference between SATA and NVMe SSD connections if you look at the slot on the motherboard. Check your computer specifications to see which interface your computer supports. Even easier, use the Crucial Advisor or System Scanner to find compatible parts.

If you have the option of multiple M.2 slots where at least one supports PCIe, it’s worth considering your secondary slot for an SSD upgrade. When combined with an NVMe SSD, PCIe will result in faster read and write times.

Are all M.2 drives NVMe?

Remember, M.2 is just the form factor. M.2 drives can come in SATA versions (like the Crucial MX500 M.2 for example) and NVMe versions (like the 970 Pro/EVO), which describes the bus they use to electrically communicate with the other PC components. SATA M.2 SSD drives and 2.5” SATA SSDs actually operate at virtually identical specs. NVMe M.2’s on the other hand, definitely do not, as we’re about to discuss.

Can I put NVMe in SATA?

Both physically and electrically, any M. 2 PCIe NVMe SSD will not be compatible with your M. 2 SATA port. Basically, different protocols and interfaces are used in both these connections.

Is RAM faster than SSD?

The main benefit of a RAM drive is its increased read and write speeds compared to an SSD or hard drive. It will be multiple times faster than even the fastest SSD.

If you’re looking for a drive with faster speed benefits, then the NVMe drive is definitely worth considering. This is especially true if your application is hard drive intensive or requires constant reads/writes to and from the hard drive. However, both types of drives have their own advantages and uses, so it’s ultimately up to you to decide which one is best for your needs.

In conclusion, this post has demonstrated the distinctions between SATA and NVMe in some cases. We hope that you can easily know which hard drives are better for you.