Do you want to know what is SSD, what does SSD stands for, and how an SSD works? SSD is a type of storage device and use a similar technology to hard drives, but with some key differences. Like USB drives, SSDs store data on flash memory, which is accessed digitally. Hard disk drives (HDDs), on the other hand, use a spinning platter and an arm that moves across the platter to read each portion of data. As a result, SSDs can boot and load nearly instantly, since they don’t have to mechanically seek out data on a spinning platter. Let’s follow this article to know information about SSD and more now. 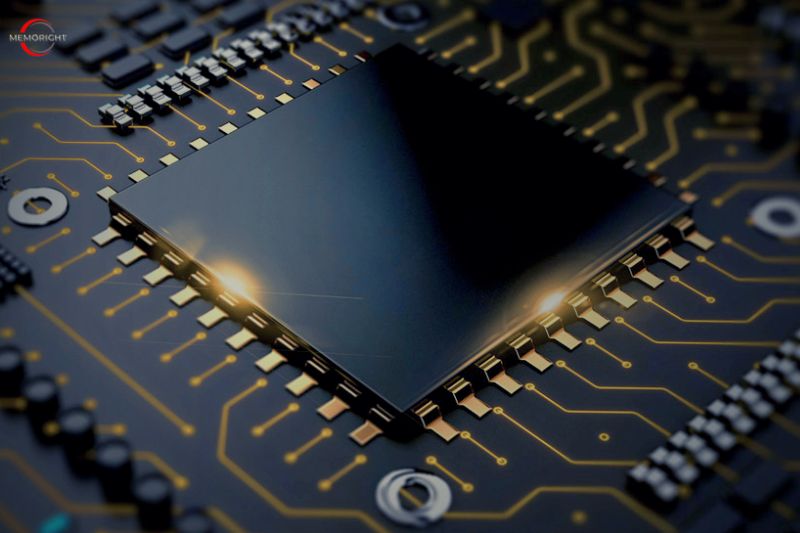 An SSD (or Solid-state Drive) is a type of storage device used in computers. This non-volatile storage media stores persistent data on solid-state flash memory. SSDs replace traditional hard disk drives (HDDs) in computers and perform the same basic functions as a hard drive. But SSDs are significantly faster in comparison. With an SSD, the device’s operating system will boot up more rapidly, programs will load quicker and files can be saved faster.

A traditional hard drive consists of a spinning disk with a read/write head on a mechanical arm called an actuator. An HDD reads and writes data magnetically. The magnetic properties, however, can lead to mechanical breakdowns.

By comparison, an SSD has no moving parts to break or spin up or down. The two key components in an SSD are the flash controller and NAND flash memory chips. This configuration is optimized to deliver high read/write performance for sequential and random data requests.

How do SSD works? 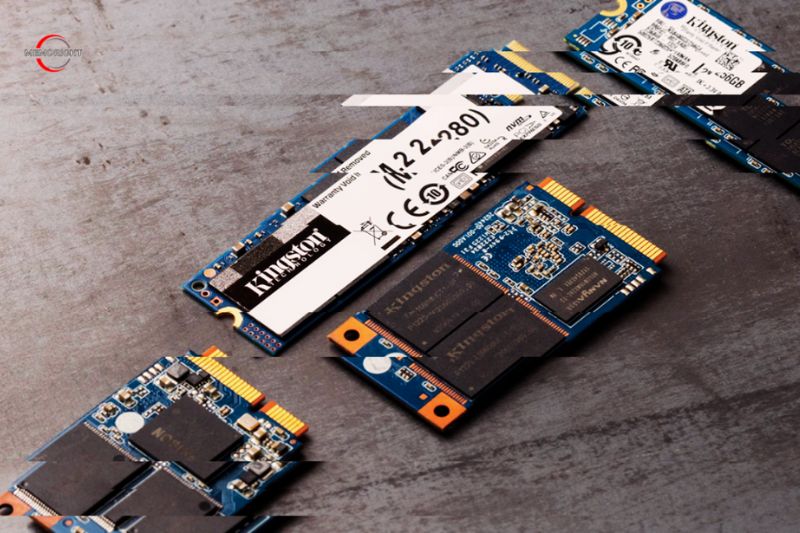 SSDs or HDDs work alongside your system’s memory and processor to access and use data. Solid state drives use different technology than traditional hard drives that allow SSDs to access data faster, improving your computer’s performance. This data includes things like your operating system, games, images, or music.

For example, if you want to access data from a spreadsheet and perform some basic edits, here’s what’s going on behind the scenes:

In addition to being faster, SSDs are more durable because they don’t have moving parts that can be broken or wear out, especially when they’re moved around. Plus, they use less energy, saving battery life.

Installing an SSD is one of the easiest ways to transform almost every aspect of your system’s performance, making slow load times a thing of the past.

What are the Major Features of SSDs? Several features characterize the design of an SSD. Because it has no moving parts, an SSD is not subject to the same mechanical failures that can occur in HDDs. SSDs are also quieter and consume less power. And because SSDs weigh less than hard drives, they are a good fit for laptop and mobile computing devices.

In addition, the SSD controller software includes predictive analytics that can alert a user in advance of a potential drive failure. Because flash memory is malleable, all-flash array vendors can manipulate the usable storage capacity using data reduction techniques.

What are the Advantages and Disadvantages of SSDs?

The benefits of SSDs over HDDs include:

Downsides that come with SSDs include:

What are solid-state drives used for? SSD adoption began in high-performance technology areas and in enthusiasts’ PCs, where the drives’ extremely low access times and high throughput justified the higher cost. But they have since become an accepted option — or even the default choice — in lower-cost mainstream laptops and PCs.

SSDs have specific benefits in the following areas:

What are the types of SSDs? 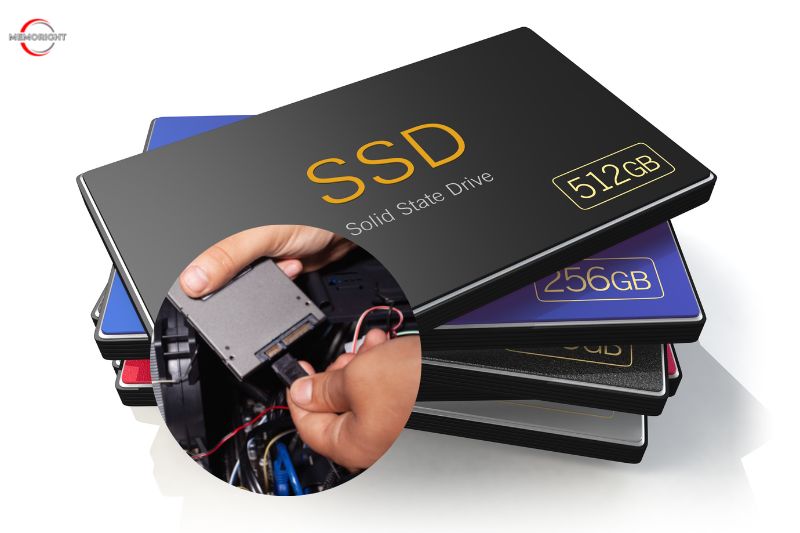 There are different types of SSDs on the market today. You’ve probably heard the terms “SATA,” “NVMe,” “PCIe,” and “M.2,” but what exactly are they?

To begin with, the different types of SSDs depend mainly on the connection interface between the storage unit and the computer or server. Let’s dive into each type.

SATA delivers speeds up to 600 MB/s, and its size fits most notebooks and PCs, hence its popularity. SATA also comes in a smaller size, referred to as mini-SATA (mSATA).

SATA is the slowest among all SSD types, but it still has a data transfer rate up to 5x faster than HDDs.

Non-Volatile Memory Express (NVMe) is a protocol for SSDs that allows data exchange speeds to reach up to 2600 MB/s — that’s almost 5x times as fast as SATA SSDs. NVMe SSDs are newer than the SATA SSDs and usually use peripheral component interconnect express (PCIe), discussed in more detail next.

NVMe SSDs are more expensive than SATA SSDs and usually require more power. That’s why they’re only used for specific needs, such as for businesses that prioritize high data processing and transfer speeds.

The NVMe protocol also works with flash memory, which means that even external or portable. NVMe SSDs will perform just as fast as internally connected NVMe SSDs.

You can also categorize SSDs according to the connectors used, which define the data transfer speed.

PCIe is the same connector used to connect high-performing graphic cards directly to the motherboard. When NVMe SSDs use PCIe connectors, they deliver the fastest possible data processing and transfer speeds.

However, the difference in speed, or bandwidth, is most noticeable when dealing with larger files (50 GB or more), but when starting Windows or launching a game, it won’t be much different from using typical SSDs.

Formerly known as Next Generation Form Factor (NGFF), the M.2 connector ensures that an SSD reaches the fastest speed possible (upwards of 2600 MB/s). If the computer’s motherboard doesn’t have an M.2 connector, then alternatively, a PCIe card with an M.2 connector is used to connect the NVMe SSD to the motherboard.

The M.2 connector is relatively small in size and is there to replace mSATA. It’s also suitable for small-sized notebooks as well as larger devices. M.2 connector is compatible with SATA, PCIe, and even USB 3.0.

The SSD market is dominated by a handful of large manufacturers, including:

These manufacturers produce and sell NAND flash chipsets to solid-state drive vendors. They also market branded SSDs based on their own flash chips.

Factors to Consider When Shopping for SSDs

Every SSD warranty covers a finite number of drive cycles, determined by the type of NAND flash. An SSD used only for reads does not require the same level of endurance as an SSD intended to handle mostly writes.

This determines if a replacement SSD works with existing storage and the number of SSDs that can fit in a single chassis.

This determines maximum throughput and minimum latency thresholds, as well as the expansion capabilities of the SSD. Manufacturers qualify their SSDs for NVMe, SAS and SATA.

The drive interface also specifies the maximum power of an SSD, although many enterprise SSDs are engineered to be tuned while in operation.

The most affordable form of storage is indeed the HDD, whereas SSDs, even with all their types, are generally more expensive. SATA SSDs are the most affordable SSD type. In other words, if you have a small budget but are seeking performance, then SATA SSD is the most suitable option for you.

On the other hand, if budget isn’t an issue, a better-performing NVMe is the more efficient choice

Can an SSD get a virus?

Any device that stores data can theoretically have a malware infection like a virus, whether it’s a hard disk drive or an solid-state drive. Some dangerous malware, like a kernel rootkit can be quite challenging to remove. We recommend you use intelligent cybersecurity software to shield your drive from all kinds of malware proactively.

Is SSD better than HDD for gaming?

SSDs are better than HDDs in almost every way, including playing games. The faster speed of a typical SSD helps boot and run your games faster. That’s why so many new gaming PCs, and even the PlayStation 5, use an SSD instead of an HDD. But whether you use a gaming SSD or an HDD, we do recommend that you take advantage of a top antivirus for gaming to secure your data from phishing, malware, keyloggers, and exploits. Unfortunately, gaming security threats nowadays can quickly ruin any gamer’s day.

What type of SSD is best?

If you have an old computer with slow loading times in need of a performance boost, a great speed-augmenting solution is buy a SATA SSD. But if being cutting edge and speed is what is what you’re looking for, nothing that beats a PCIe, NVMe, M.2 drive.

The SSD market is booming due to increased demand from businesses and web hosting services. But what’s the difference between SSD and HDD, and will SSDs permanently replace HDDs? It’s still uncertain whether HDDs will become a thing of the past, given their generous storage capacity and affordable cost.

Nevertheless, the cost of SSDs is decreasing. And their availability in different storage capacities, sizes, and configurations makes them more affordable than ever and we recommend you should use SSDs over HDDs for your PC or read more here!