The two types of storage devices utilized as the local disk for a computer are SSD and HDD. You have to decide which one you want for yourself. Both have their positives and negatives, so is a Solid State Drive (SSD) better, or would buying a Hard Disk Drive (HDD) be the better choice? It all relies on your opinions, needs, and financial situation. What makes the SSD vs HDD different from one another? Let’s compare the various aspects of each storage device and find out which one is the right one for your needs. A hard drive or hard disk drive (HDD) is a type of data storage device that is used in laptops and desktop computers. An HDD is a “non-volatile” storage hard drive, which means it can retain the stored data even when no power is supplied to the device. Operating systems (OS) tell the HDD to read and write data as needed by programs. The speed that the drive reads and writes this data is solely dependent on the drive itself.

HDDs started as massive, room-filling devices with a capacity of about 3.75 megabytes. Today, by comparison, an HDD that fits easily in a desktop computer can have upwards of 18 terabytes worth of storage.

A solid-state drive is non-volatile memory (NVM) computer hardware that stores data without moving parts. Whereas hard disk drives (HDD) use a spinning magnetic disk and a mechanical write head to manipulate data, SSDs use charge in semiconductors. Follow “What is an SSD?” to get all information about an SSD.

Internal SSDs are installed within computers, while external SSDs are plugged in like external HDDs — frequently to USB 3.0 ports — and serve similar purposes. An SSD is a memory storage device that implements integrated circuits rather than mechanical components for storage. The integrated circuits reduce their overall size and make them silent when working. For example, an Apple product like a MacBook has an SSD for a hard drive, giving the Mac a slim profile.

Non-volatile memory express (NVMe) is a logical-device interface protocol for accessing a computer’s non-volatile storage media. NVMe is a standard specification used on SSD drives so that each manufacturer does not have a unique device driver. NVMe SSDs utilize Peripheral component interconnect express (PCIe or PCI express), which can handle the multiple back-and-forth requests from OS to SSD. PCIe is a common high-speed connection interface on the motherboard. 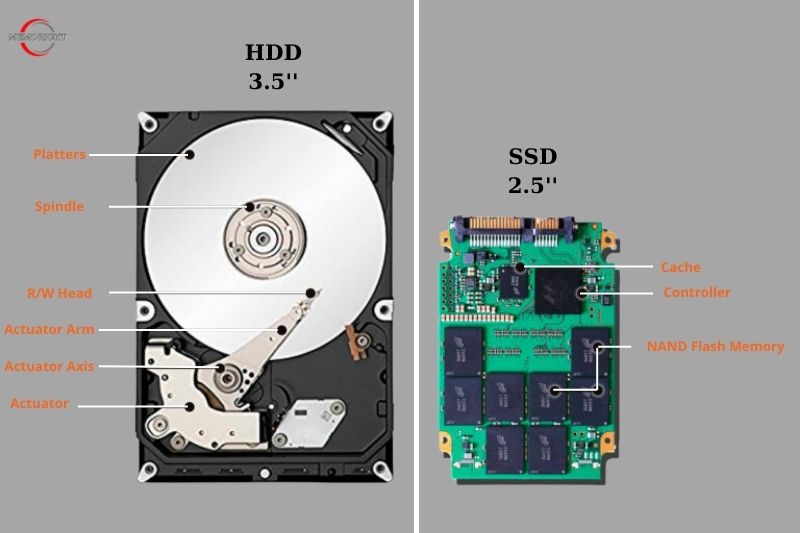 SSDs use flash memory rather than magnetic platters, which is a significant improvement in terms of storage capacity. Popular storage sizes like 128GB, 256GB, 512GB, 1TB, and 2TB are available in more recent SSDs. The same integrated circuits that make the device smaller also increase storage density.

The largest SSD available for the typical customer is about 8 terabytes. With the same 2.5-inch form size but a 3.5-inch disk thickness and an SAS interface, Samsung and Toshiba released 30.72 TB SSDs on the market in 2018. Nimbus Data announced and distributed high-capacity 100 TB drives using a SATA interface to demonstrate the possibilities of SSDs. SSD technology has virtually limitless potential because it is always being improved and expanded.

Since HDDs have been around longer, their capacity has increased dramatically over time, and they now come with 20 terabytes of storage when they are shipped commercially. Many laptops and desktop PCs available nowadays include 500GB of storage as standard.

Read/write heads and spinning magnetic drive platters are used by HDD disks to operate. Because a disk spin-up is required, HDD startup times are slower than SSDs.

When comparing SSDs with HDDs, speed is when we start to notice a difference. Although traditional hard drives have never been able to match the speed of solid-state drives, the gap is now more comprehensive than ever, thanks to SSD advancements and the removal of the SATA III bottleneck.

Now let’s examine HDD speeds. The speed of these drives depends heavily on their RPM (revolutions per minute) capacity because they employ spinning platters; the more significant the RPM, the faster the drive can operate. You’re better off choosing a drive that can hit 7,200 RPM, which is what most modern HDDs will be rated at, rather than a disk that can only reach 5,400 RPM, which is the slowest speed most modern hard drives are capable of.

Higher-RPM drives are available, going as high as 10,000 RPM, although they are more difficult to find and expensive.

On an SSD, file copying and transfer are also considerably quicker. Due to their long battery life, they require less energy than an HDD between a fourth and third.

Faster boot speeds are promised by Intel’s SSD, which the company claims are 8 times faster than an HDD.

SSD disks don’t have moving parts, unlike HDD drives. SSD reliability is hence better. An HDD’s moving parts raise the possibility of mechanical failure. The hard disk drive is prone to “head crash” because of the hard drive’s rapid platter and head motion. Electronic failure, a rapid loss of power, physical trauma, deterioration, corrosion, or improperly made platters and heads can all result in head crashes. Magnetism is a factor that affects reliability as well. Since HDDs rely on magnetic storage, they can be harmed or have their data corrupted when placed next to solid magnets. SSDs are not susceptible to this type of magnetic distortion.

You’re probably accustomed to the clicking sound that occurs just before a hard disk fails or the sound of an HDD spinning up as it begins to work. In comparison, SSDs are silent because they don’t have moving parts.

While working on demanding tasks, the only sound you might hear is your computer’s fans spinning up and down. This is because running multiple processes at once might cause your computer to overheat and cause performance problems.

SSDs consume less electricity than spinning disks because they don’t have any mechanical parts. Better lifetime of battery is one reason why most laptops use SSDs today. Since hard disk drives are always in operation, more power is needed.

The flash storage market is unstable and fluctuates according to supply and demand. SSDs are now far less expensive than they were, but the price gap is still substantial. A 1 TB internal HDD typically costs $60, while a 1 TB internal SSD often costs $150.

HDDs are the best option if you want the most capacity for the least amount of money. Traditional HDDs are now quite inexpensive to build because of manufacturing procedures, which increases their accessibility.

Although you may find some huge HDDs for incredibly inexpensive rates, it’s vital to read user ratings and dependability reports if you plan to store crucial data on the drives.

Additionally, we have a guide on the finest low-cost hard drive offers that might help you score a discount.

Which Drive is Best? If you’re still unsure whether an SSD or HDD is suitable for you, let’s review how SSDs and HDDs stack up against each other. HDDs are less expensive, especially when it comes to higher capacity, despite SSDs being faster, more durable, and more energy-efficient.

Regarding reliability, contemporary SSDs are almost as reliable as HDDs, so as long as the price is unimportant, SSDs prevail. HDDs are only useful today for storing vast volumes of data that won’t be accessed often. Otherwise, an SSD offers higher performance and a faster computing experience if you can afford it.

As we previously noted, it may be worthwhile to get both a smaller SSD for your operating system and apps and an HDD to store your files if you have the opportunity. If you don’t have enough room in your device for numerous hard drives, you might want to look at hybrid drives, also known as SSHDs, which combine the most significant features of SSD and HDD into a single drive.

Which Storage Type is Best? 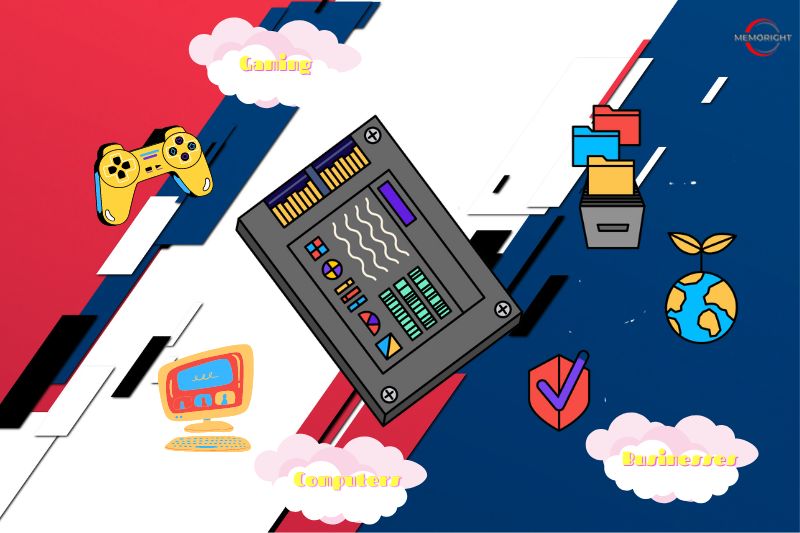 Laptops are now much lighter and more portable thanks to solid-state technology. In fact, the distinction is so stark that any new laptop you purchase needs to have an SSD.

SSDs are already a regular component in laptops because:

These are all important advantages for anyone utilizing a laptop. Even if you get less storage for your money, you still benefit from a number of additional factors that usually balance the scales in your favor. Depending on the alternatives offered by the laptop maker, you may also pay a little more for a larger SSD.

SSDs are now the new gaming standard following the launch of the PlayStation 5. Comparing the load times for PS4 and PS5—one with an HDD and the other with an SSD—makes it very evident how much better an SSD is. Any new AAA game will eventually almost certainly need a solid state drive.

However, acquiring an HDD will be more than plenty if money is short, especially because SSDs have severe space limitations. You can do a lot to boost your computer’s gaming performance, even with an HDD.

Enterprise SSDs are a good option for companies that deal with server activity or large read/write workloads. These are more expensive SSDs with reduced failure rates that are designed to endure power outages.

The single-level cells (SLC) used in enterprise SSDs are also more durable and capable of withstanding many more read and write operations than the triple-level cells (TLC) used in most consumer SSDs. But unless you expect intensive usage not generally seen on a personal computer, you shouldn’t be concerned about these specifications. 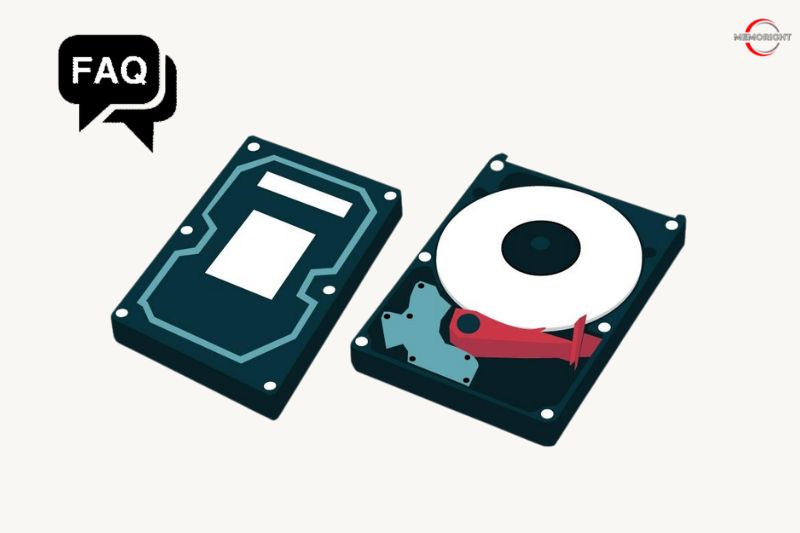 Is it better to have SSD and HDD or just an SSD?

The HDD offers high storage capacities at a low price, while the SSD provides blazing fast access speeds at a higher cost. Used together, PC users can access their most important files quickly via the SSD, while storing media and other large files on their less expensive HDD.

For most laptop or desktop computer users, a 512 GB SSD is sufficient. It provides enough speed and storage to simultaneously load applications or play games.

Of course, it is better to have 256GB than 128GB, and larger SSDs perform better. But you don’t actually need 256GB to run “most modern computer programs”. You would only need that much space for processing large files, such as re-encoding videos. In most cases, it’s better to have more memory.

HDDs are cheaper and you can get more storage space. SSDs, however, are incredibly faster, lighter, and more durable, and they use less energy. Your needs will dictate which storage hard drive will work best for you.

In conclusion, Memoright has demonstrated the distinctions between SSDs and HDDs in some cases. We hope that you can easily know which hard drives are better for you.