The Sabrent Rocket 4 Plus vs Samsung 980 Pro come in the best performance NVMe category and have DRAM cache and lots of other similarities, but there also have some key differences. So which one is faster?  Let’s check their specifications and real-world benchmarks and see which hard drive is worthy to purchase. 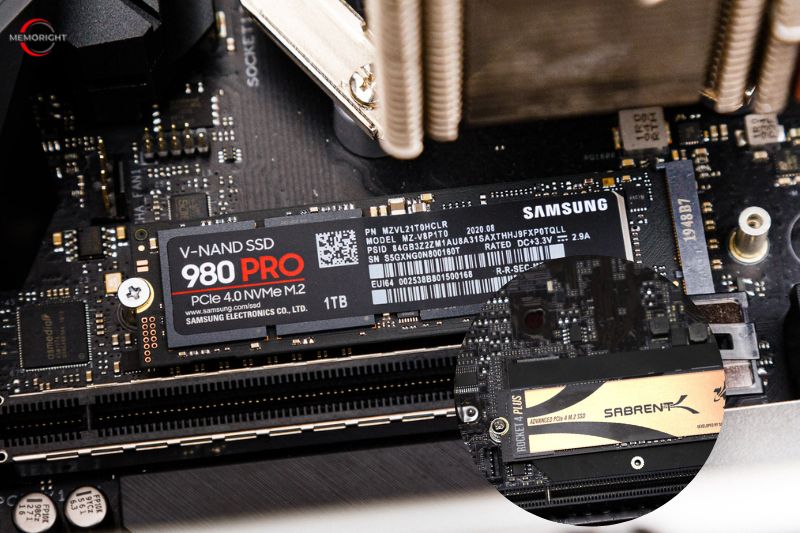 The Rocket 4 Plus is the company’s latest NVMe Gen4 SSD powered by the Phison PS5018-E18 controller. The controller is a second-generation PCIe controller, a successor to the PS5016-E16 that powered the early Gen4 NVMe SSD like the Sabrent Rocket SSD. The controller is paired with Micron’s 96L 3D TLC NAND Flash and DDR4 memory. If those specs sound familiar to you, that’s because there are other NVMe Gen4 SSDs that have the same components used. For example the Gigabyte Aorus Gen4 7000s.

According to Phison, their E18 is “the only solution on the market” to break the 7GB/s barrier for both read and write access with superior power efficiency. The new controller is about 2.1x faster compared to PCIe Gen3x4 and about 1.5x faster compared to its predecessor, the E16.

The 980 PRO was first previewed in January at CES as Samsung’s first consumer SSD to support PCIe 4.0, but with very little technical information. No release date was announced but Samsung’s PR said to expect more information in Q2. The big surprise is that the 980 PRO will apparently be using TLC NAND, a first for Samsung’s PRO models. Samsung has been the last holdout offering high-end MLC-based SSDs while the rest of the SSD industry has moved on to TLC (and QLC), for both consumer and enterprise markets.

The switch from MLC to TLC means the rated write endurance of the 980 PRO will be half that of the 970 PRO and equivalent to the TLC-based 970 EVO and EVO Plus. The upside is that the 980 PRO may be more competitively priced against other high-end consumers NVMe SSDs.

The Most Popular Comparisons: The 980 Pro vs Rocket 4 Plus

There are several similarities between the Samsung 980 Pro and Sabrent Rocket 4 Plus. The M.2 port on the system is used to connect the two SSD hard drives and they come with a PCIe and TLC 3D NAND interface. But there is a difference.

The Sabrent Rocket 4 Plus and Samsung 980 Pro allow you to choose between different storage capacities. The same available size options are 1TB and 2TB. However, the Rocket 4 Plus’s maximum storage is 4TB. It doesn’t offer friendly options at 250GB and 500GB, while 980 Pro’s size versions are 250GB to 2TB. So, the Sabrent Rocket 4 Plus might be a good option for those looking for a large-capacity SSD and the 980 Pro provides more solutions for any customer demand.

The 980 Pro, on the other hand, provides 4K random read and write speeds faster than Rocket Plus up to 30%. There is no doubt that the 980 Pro will be a more viable option for higher-end workstation setups that transfer large amounts of files on a daily basis. But with the high TBW (Total Terabytes Written) numbers of Sabrent Rocket 4.0 Plus. You can simply say that the Rocket 4 Plus is going to last longer as compared to the 980 Pro.

It states that the two products are very close, but Sabrent comes out slightly ahead. A fraction of a millisecond here and there may not seem like much, but when a drive is processing thousands or more files a second, it adds up. However, it lacks 256-bit encryption which could be a great turning point in this comparison.

The manufacturer’s warranty is very close to the customer and lasts 5 years, with the same amount of allowed writing (TBW). The Rocket 4 Plus or 980 Pro each comes with only the SSD hard drive. However, the two manufacturers provide very useful tools for management and cloning on their websites as downloads.

The price of both these SSDs is almost similar. If you want to know the more different prices of different storage sizes, you can visit amazon or its official site.

Which One You Should Buy? 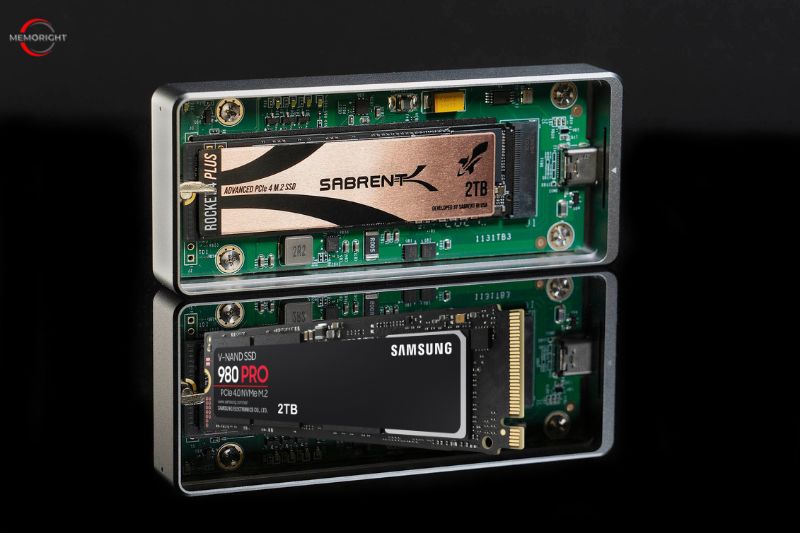 We would suggest going to the 980 Pro if the price of both is the same in your region. This applies to those who want to use the AES-256 Encryption on 980 Pro. Otherwise, Rocket 4.0 Plus is an equally fast and capable SSD. So, if you are OK with the price of the 980 Pro, you can go for it. However, there are also no problems with the Sabrent Rocket 4.0 Plus except for the encryption part.

Finally, you can decide between the Samsung 980 Pro and Sabrent Rocket 4 Plus with a clear conscience based on the current prices and your own preferences.

Is NVMe faster than SSD?

NVMe SSDs are about 3-4 times faster than SATA SSDs with read-write speeds of up to 2000MB/s compared to only 600MB/s of SATA SSDs. Unlike SATA and SCSI, NVMe doesn’t need a controller to communicate with the CPU, making communication with the CPU even faster.

Is a heatsink necessary for SSD?

Because of its small size, the M. 2 SSD requires cooling since it uses a lot of power due to its high-performance features. Because of this, a heatsink is oftentimes required when operating the M. 2 SSD card.

In conclusion, this post has demonstrated the distinctions between the Rocket 4 Plus vs Samsung 980 Pro SSD in 5 cases. We think that you can easily know which SSD hard drive is better for you. And if you have any different ideas for Rocket 4 Plus SSD and 980 PRO, you can take a look at other product comparisons here.