The WD SN850 vs 980 PRO are both high-end NVMe solid-state drives (SSDs) from Samsung and Western Digital. The WD Black SN850 is the newer model, released in 2020, while the Samsung 980 PRO was released in 2019. Both drives offer excellent performance, with the SN850 slightly outperforming the 980 PRO.

So how does the WD Black SN850 compare with Samsung’s own high-end PCIe 4.0 compatible SSD, the Samsung 980 Pro? Let’s check their specifications and real-world benchmarks and see which hard drive is worthy to purchase. 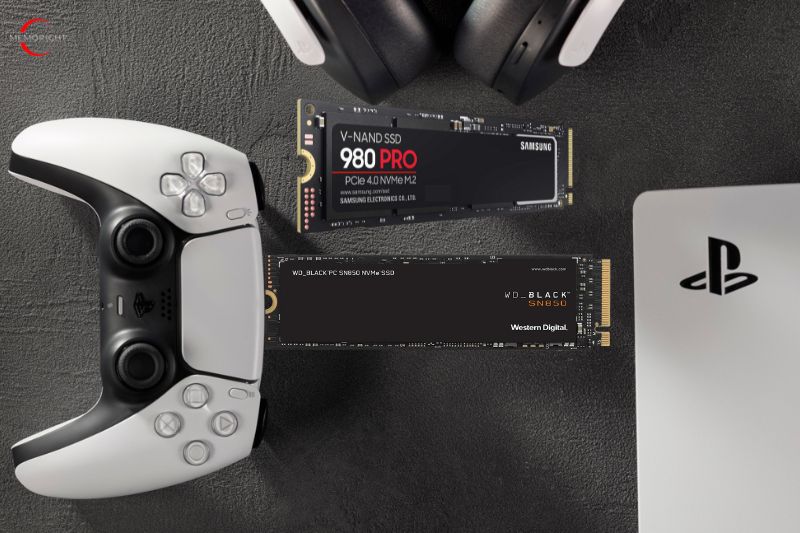 As we move into a world where PCIe 4.0 is becoming more widely available to consumers in all segments of computing, it’s time to enable support for these new standards. Benefits such as increased peak speed or decreased power consumption are obvious, vital specifications that PCIe 4.0 brings to the table, so having optimized products to go along with it is a must as new generations trump the old. Samsung’s first PCIe 4.0 x4 offering for consumers is the 980 PRO, a series of M.2 drives with capacities up to 2.0 TB.

Western Digital has rapidly risen to be a top-tier player in the market, and this is no more evident than with their newest high-end SSD, the WD Black SN850.

WD/SanDisk was late entering the consumer NVMe SSD market and its first product was not high-end by the standards of the time. With the second attempt, they got serious and designed their own NVMe controllers, following the same strategy of vertical integration that has worked so well for market leader Samsung. There were no bugs or performance problems with the in-house controller, which immediately made Western Digital a major player in this market segment. However, they didn’t quite reach the top, as they competed against the Samsung 960 EVO and 960 PRO.

If you want to check the real benchmark scores for these SSDs from other users, you can go here.

The Most Popular Comparisons: 980 PRO vs Black SN850 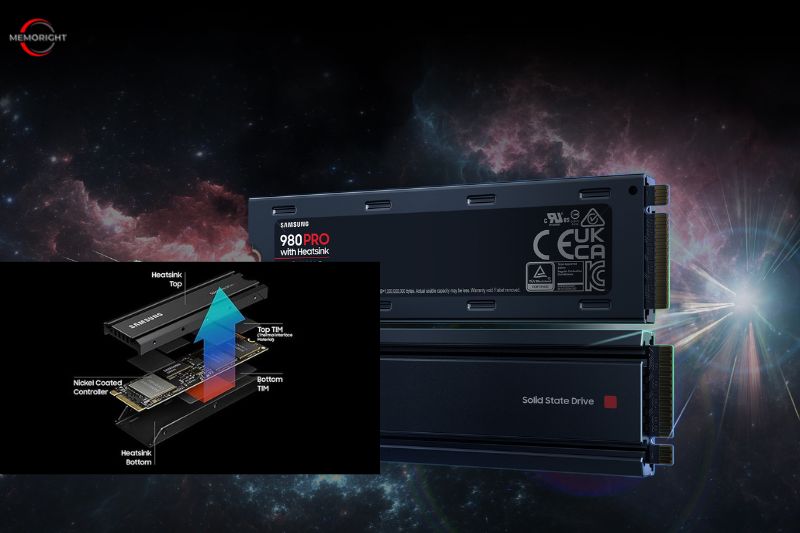 The first thing we’re going to check and compare is their formats, as in both cases they carry M.2 in its 2280 version, which is very typical of what is needed at the moment due to the NAND flash technology and the size chosen.

In the case of the Samsung 980 PRO, we get memory designed and manufactured by the company itself, which it calls V-NAND 3-bit MLC which is surprising since this is the brand’s latest SSD. Western Digital Black SN850 receives 96-layer TLC BiCS4 memory, so it is technically more advanced than its competitor, but as we will see later, it is not.

In terms of interface, Samsung 980 Pro is a better Gen 4 NVMe as compared to the WD Black SN850. The two main reasons are its MLC NAND and Encryption. The SN850 lacks any kind of encryption and has TLC NAND which is less reliable than the 980’s MLC NAND Flash.

Thus, in this aspect, Samsung 980 Pro provides more capacity options than WD Black SN850. In case, if you’re intending to get an SSD just to boost up the read and write speeds of the Operating System, then you can rely on the 250 GB Samsung 980 Pro SSD. Though the higher variants are good enough and get you effective R/W speed, they’re costlier ones.

When selecting an SSD, performance should be one of the most important factors to be considered. The SSD with fast read and write speeds can improve computer performance and improve your user experience. Thus, this part is about 980 Pro vs SN850 for performance.

In short, in the aspect of performance, SN850 is a little bit better than 980 Pro. Reading and writing speed is also affected by other factors, so SN850 may be faster than 980 Pro in actual use.

When choosing an SSD, the budget would also be taken into consideration. Here, we will show you the last difference between SN850 and 980 Pro. It is the price. According to the official site, the 2TB SN850 is about $320, but the price of the 2TB 980 Pro is about $348.

As for WD Black SN850 vs Samsung 980 Pro, the 980 Pro is more expensive than SN850. If you want to know the different prices of different storage sizes, you can visit its official site or some retailers like amazon, etc. 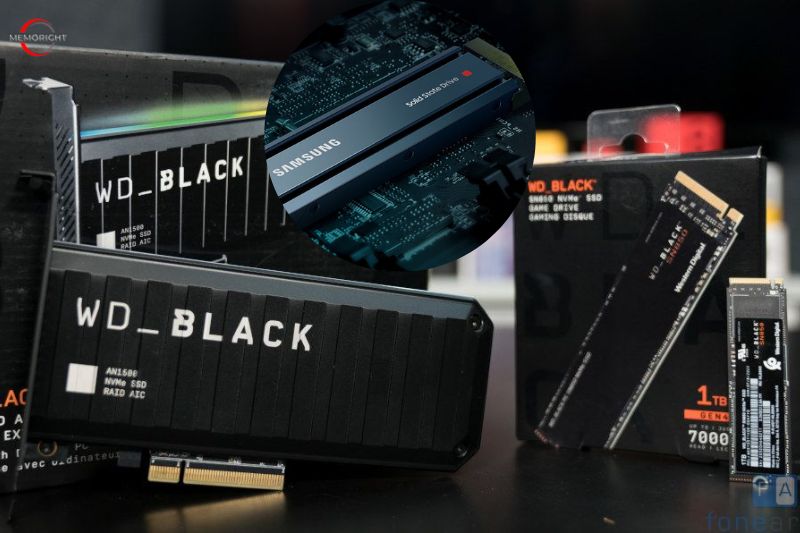 All in all, both SN850 and 980 Pro offer high performance in two different application modes. The great performance and the PCIe 4.0 interface protocol prove that this SSD is a future-proof product. If you are just a gaming enthusiast or casual user, both SN850 and 980 Pro are also great options, as it offers better responsiveness with fast transfer speeds, fast load times, and low latency.

The WD Black SN85 is a great unit for installing a PC operating system, and can also be used as a second storage drive for games that require storage space or for storing large files. While the Samsung 980 Pro offers excellent workstation performance, which is what PCIe 4.0 SSDs are meant to be. Considering its price and overall performance, its 2 TB version appears to be the best of its storage counterparts.

All in all, you can choose Samsung 980 Pro or WD Black SN850 based on your actual needs.

The Crucial P5 Plus PCIe 4.0 SSD has a price-to-performance ratio that’s hard to beat, especially when compared to the Samsung 980 Pro. It trades blows when it comes to speed and has a similar warranty and TBW rating, but it costs considerably less.

Is Samsung 980 Pro suitable for the PS5?

The Samsung SSD 980 PRO PCIe 4.0 NVMe is a great option if you are a PS5 owner looking for a good and reliable SSD to expand the storage on your console. It has an affordable price tag even if you wish to double your PS5 storage with 980 Pro 1TB.

The Samsung 980 Pro used to require a manual heatsink before it could be used with a PS5 console, but the manufacturer has now created a buying option that has the heatsink installed out of the box.

Samsung 980 is usually the clear favorite for many reasons. Firstly, Samsung makes its own parts in-house which ensures better quality control. Secondly, they’ve been the leader in SSDs for years, so their reputation for quality is very good. Thirdly, the 980 runs much cooler than the 850 and uses less power (watts) to deliver similar results. This could make a difference in lifespan as the years go by.

Even though Samsung has rigorous hardware quality, they failed in the software department. WD offsets this by being the undisputed champion. If you look all over the Internet, there is an issue with speed being drastically lowered and the only way to fix it is to clear the cache or clear the drive. It’s documented and it’s been many months with no firmware fixes announced, and Samsung hasn’t even bothered to address the issue Publicly.

As for Samsung 980 Pro vs WD SN850 SSD, this post has shown their differences in several aspects. We hope you can easily know which SSD drive is better between them. And if you have any different ideas for the 980 Pro vs SN850, you can take a look at other product comparisons here.