Samsung 870 QVO vs 870 EVO are both great choices for a budget-friendly solid-state drive. The 870 EVO offers slightly better performance and reliability, while the 870 QVO is a bit cheaper. Both drives offer great value for the money, so it really comes down to personal preference. So, which one should you choose? Let’s follow our blog to find out your answer. 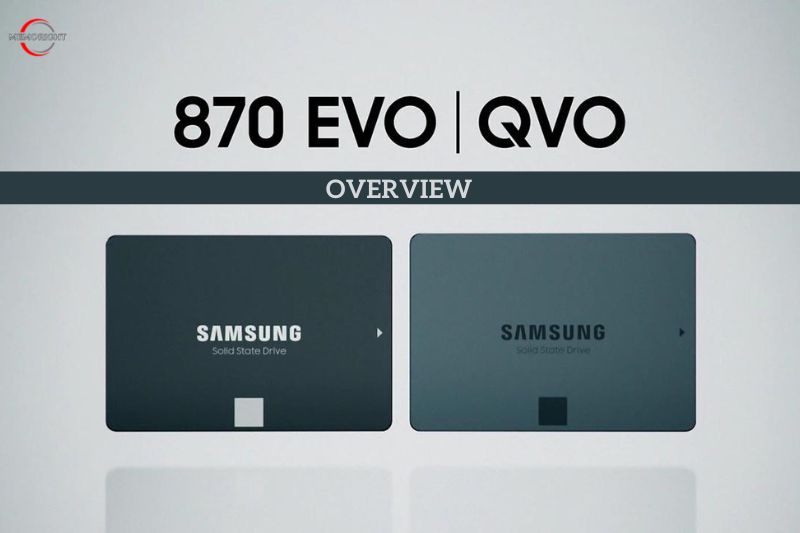 The Samsung 870 EVO is the latest entry into the company’s successful line of consumer SSDs. The EVO line has been a highly successful endeavor for the company, as the line finds the perfect balance between performance and price while offering Samsung’s pedigree in reliability. These mid-range consumer drives are designed for all kinds of use cases, from everyday use and gaming to those looking for a decent upgrade in performance for PC and even just those looking for a reliable SATA SSD.

The new Samsung 870 QVO SSDs arrive into a market landscape that doesn’t look all that different from what the 860 QVO faced at the end of 2018. Samsung is no longer the only brand selling consumer SATA SSDs with QLC NAND, but it’s not a big club. Most of the other QLC SATA drives are so low-end that the manufacturers won’t commit to using any particular memory inside, and they’re using whatever is cheapest at the moment. Some months, there’s more to be saved by going with a DRAMless controller and TLC NAND that fell off the back of a truck, rather than using Samsung’s strategy of pairing theoretically cheaper QLC NAND with a solid controller.

The Most Popular Comparisons: Samsung SSD 870 QVO vs EVO

Samsung is still the only consumer SSD vendor to provide detailed performance specifications. Almost any Samsung drive can saturate the 6Gbps interface under ideal conditions, with random or sequential reads or writes at a high enough queue depth. The same is true for Samsung 870 EVO vs 870 QVO.

The type of flash memory used is the initial distinction between the Samsung SSD 870 EVO and the Samsung SSD 870 QVO. The TLC NAND, which is frequently used and can hold three bits per cell, is installed by the manufacturer in each EVO SSD. On the other hand, QVO SSDs use QLC NAND, which uses up to 4 bits per storage unit, has a better data density, and, as a result, is produced at a lower cost per GB. The manufacturer claims that the potential service life is 1.5 million hours under both scenarios.

The Samsung 870 EVO and QVO allow you to choose between different storage capacities. The same available size options are 1TB, 2TB, and 4TB. However, the Samsung 870 QVO’s maximum storage is 8TB. It doesn’t offer friendly options at 250GB and 500GB, while 870 EVO’s size versions are 250GB to 4TB. So, the Samsung 870 QVO might be a good option for those looking for a large-capacity SSD and the 870 EVO provides more solutions for any customer demand.

In everyday use, the different flash memory of the Samsung SSD 870 QVO and the Samsung SSD 870 EVO should usually not be noticeable, which is also reflected in the same performance values ​​for sequential reading and writing of the two 2.5-inch drives with SATA interface at 560 MB/s respectively 530 MB/s.

In short, in the aspect of performance, we are facing two SSDs that are very similar in terms of technology, whose main difference is nothing more than the interface and its consequent performance in reality. Samsung 870 EVO is a little bit better than Samsung 870 QVO. Reading and writing speed is also affected by other factors, so the speed of the 870 QVO drops significantly more than that of the 870 EVO in actual use.

Buyers of the 870 QVO have to accept a reduction in the 3-year guarantee period compared to the 5 years of the 870 EVO. Calculated over a year, the TBW values ​​of the two SSD series from Samsung are the same. It is important to emphasize that Samsung’s warranty doesn’t cover neglect, unauthorized repair or modification, or product misuse.

As for Samsung 870 QVO vs EVO, Samsung EVO is more expensive than Samsung EVO but brings almost better performance than the 870 QVO. If you want to know the more different prices of different storage sizes, you can visit amazon or its official site.

The Samsung 870 QVO and 870 EVO SSD may look similar at first glance, but they are designed for different types of users. If you are looking for a 2.5-inch SATA SSD drive with a great price-performance ratio and need to regularly move large amounts of data without any drop in performance, the 870 EVO from Samsung is the right choice for you. However, if you want a cheaper SSD hard drive with huge capacities for video and music collections at low costs per gigabyte, the 870 QVO is a better option.

Is Samsung QVO better than EVO?

In Conclusion/TL;DR. Samsung EVO performs much better than QVO, but the value isn’t necessarily higher in every single application. If you want to work with extremely large, high-quality files, and you need to transfer them at high speeds without any slowdown, you should definitely get an EVO or a PRO.

What’s the difference between Evo and QVO?

Is QVO better than HDD?

Featuring sequential read and write speeds of up to 550 megabytes per second (MB/s) and 520 MB/s, respectively, the 860 QVO offers approximately 60 percent faster boot speeds, makes unzipping files 110 percent faster, and allows you to copy files a whopping 250 percent faster than a conventional HDD.

As for Samsung 870 EVO vs 870 QVO, this post has shown their differences in several aspects. Memoright hope you can easily know which SSD drive is better between them. And if you have any different ideas for the 870 QVO vs 870 EVO, you can take a look at other product comparisons here.