If your computer is running slowly or isn’t keeping up with your daily needs, it might be the cause of poor performance, slow disk speed, high memory usage, or insufficient cooling. But there’s no need to replace the whole computer – we can address the issue with some simple fixes.

In this article, we will see how to test SSD speed on a Windows 10 or MacOS, which will allow you to determine if slow disk speeds are what’s slowing your computer down.

SSD Speed: Something You Need To Know

SSD (Solid-State Drive) and HDD (Hard Disk Drive) write speeds refer to the speed of recording external data into the storage device, while read speed refers to the speed of extracting data from the storage device. Nowadays, SSD is becoming more popular than HDD because it has higher read and write speeds. In other words, tasks and programs will take less time to operate if you are running on an SSD.

What is a good read-write speed for an SSD, though? SSD performance varies depending on the variety of interfaces and brands. A typical SSD with a 500MB/s sequential read and write performance can meet the essential requirements for handling most operations.

You will notice your computer lags or performs worse than previously as the SSD speed declines, especially while using the computer for several tasks and programs in the background. So that you can determine whether to optimize SSD performance, it is necessary to test its speed regularly.

How To Test SSD Speed & Performance?

You can check the speed of the SSD via Task Manager, the Windows built-in tool. Do as follows, you can easily get it done:

Step 1: Right-click Taskbar on the bottom of your screen, and choose “Task Manager” in the extended menu.

Step 2: In the pop-out windows, you will see different tabs on the top, click “Performance“.

Step 3: Choose the SSD drive on the left column, and you will see the results of read and write speeds. 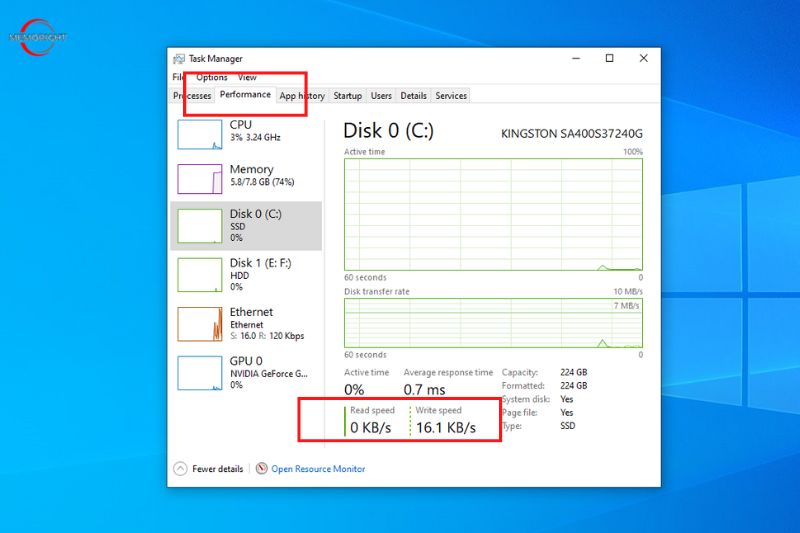 Note: From here, we can easily know the speed now, but you may notice that the data is dynamic. The speed is always changing depending on what’s going on in the background, so it’s hard to say what the specific state is.

On Windows, testing your SSD speeds can be done through the Command Prompt. It is important to run this as an administrator to prevent any potential issues. 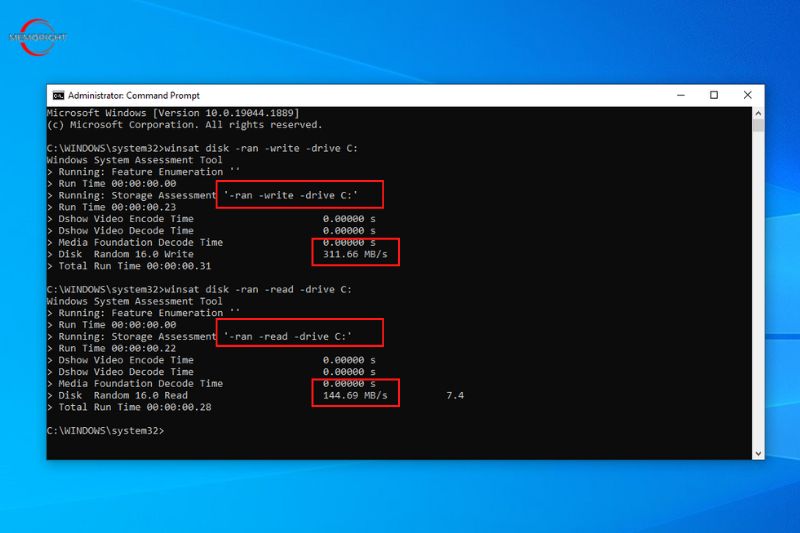 The parentheses will not be part of the command, and “(name)” will be replaced with your drive, commonly “C”. Typically, users will only have a primary HDD or SSD, although many use additional drives for storage purposes. The disk name(s) can be found by navigating through This PC and can be located through the search bar, similar to the previous step. 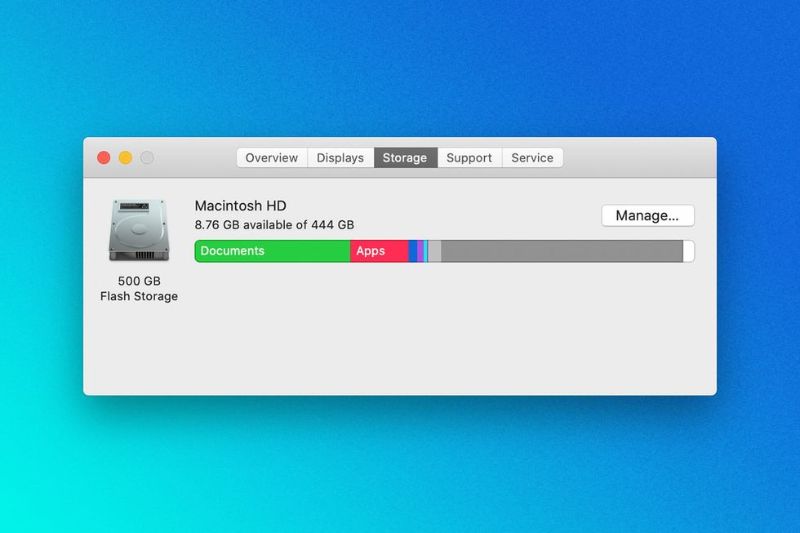 Although Apple products have a sleek and polished exterior, many users are unaware of the powerful specs and capabilities that lie beneath the surface. While Macs don’t have a built-in feature to view hardware specifications, there are still third-party programs that can provide this information.

For Windows users, there is an excellent program you can use—CrystalDiskMark. With this, you can measure the disk speed of your computer. This can be accomplished by pressing ‘all’ upon installing the program. Let’s see the features of each of these free disk speed testing software.

Step 2: Search for CrystalDiskMark and Open the app.

Step 3: Using the first drop-down menu on the left, select the number of runs. (If the default is 5, you can change it to 3, which is enough to get more accurate results.)

Step 4: Using the second drop-down menu, select the file size that the app will use to benchmark the drive. (The default selection is more than enough in most cases.)

Step 5: Using the third drop-down menu on the right, select the drive (HDD or SSD) that you want to test. 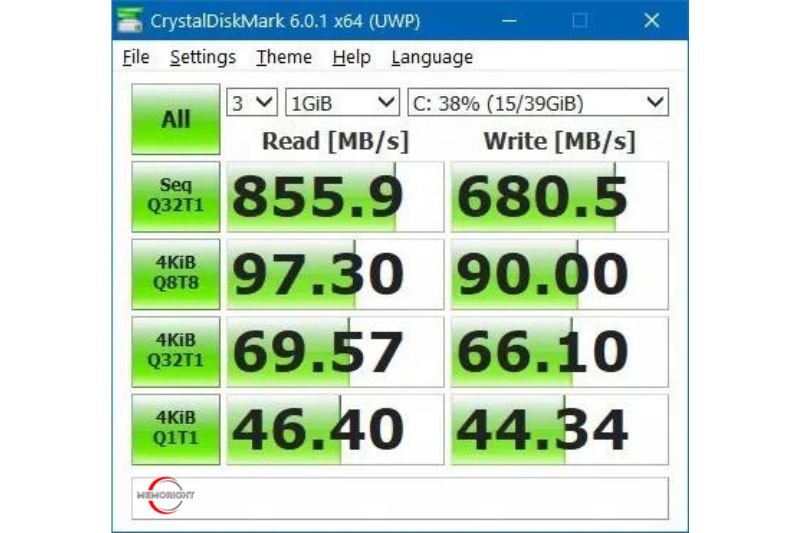 When using the All option, the tool will run all the available tests, including sequential reads and writes, and three different 4KiB random tests. If you only want to run a single test, you can click the green button on the left.

Once you’ve completed the steps, the performance tests will run on the disk for several minutes depending on the drive. After they have been completed, you’ll see the benchmark result in megabytes/second. You can hover over the result to see the IOPS results for the tests.

The “4KiB” Q8T8 uses 4K file sizes to test the drive using random (2,5,7,1…) reads and writes, which are more resource intensive than the sequential test. However, this test is less demanding than Q32T1 and Q1T1 options.

Then you can compare the result with the performance information provided by the manufacturer to see if the drive is performing as advertised, or if you’re testing a drive that you had for a while, you can figure out if it’s time for a newer and faster replacement.

ATTO Benchmark is one more free software that lets you test the speed of different partitions of a hard drive on Windows 11/10. Using this software is easy.

Step 2: Search and Open the app.

Note: It performs the hard drive speed test on the basis of two factors, namely, the I/O size and the File size. 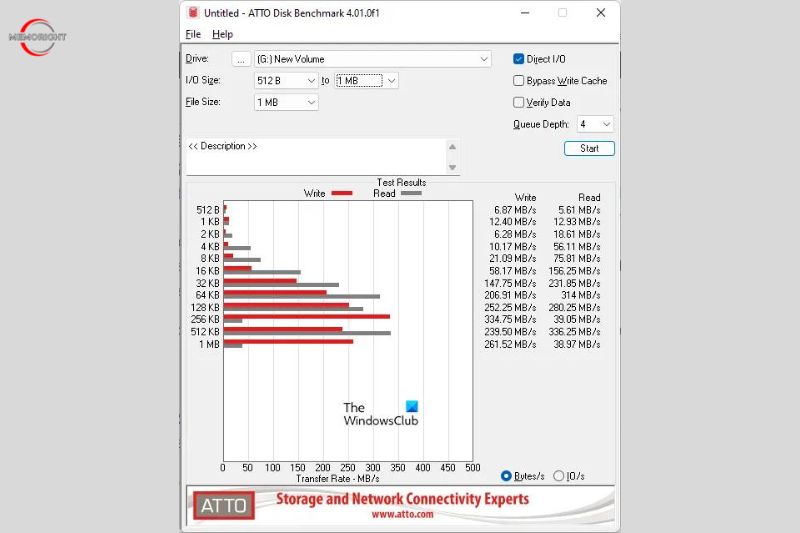 To start the speed test, select the I/O size and File size from the drop-down menu. The higher the value you select in I/O and File size, the more time ATTO Disk Benchmark will take to determine the HDD speed. If you want, you can bypass the Write cache for a particular HDD speed test.

After completing the test, it shows you the read and write speed of your hard drive along with the graphical representation for different I/O and File sizes. You can save the result in its own supported format or export the same in a JPEG image format.

You can download ATTO Disk Benchmark from their page site.

What to Do if You Have a Slow Drive?

An SSD’s typical read and write rates range from 300 to 600 MB/s. In some circumstances, boosting your memory will be more advantageous than upgrading your SSD. Since SSDs are already fast, there aren’t many advantages to upgrading to SSDs. However, switching from an older HDD to an SSD and upgrading from an older PCIe standard to a newer version will undoubtedly make a difference.

Upgrading your storage device to an SSD is a pretty easy task. Choose an NVMe or SSD depending on your needs, but make sure the device can support it. Due to a lack of available ports, not all desktops or laptops support using an NVMe drive.

After choosing your desired device, you must transfer data from your old SSD to the new one. Although moving your data from an HDD to an SSD might be a frustrating procedure, it shouldn’t be as onerous with the aid of this advice.

Now, you have learned two ways to deal with how to test the SSD benchmark on your computer. Moreover, due to the need of advancing the SSD speed to get better performance, Third-Party Applications are more recommended for both tests and to optimize the speeds. Additionally, you can enjoy more powerful functions: “How To Move Windows To SSD?“, “How to Initialize SSD in Windows And Mac OS?“, “convert HDD/SSD between MBR and GPT“, and so on.